Siwa is different, It is  Egyptians, but  North African. Most siwans are Berbers, A people that one roamed the North African coast from Tunisia to Morocco

The Berbers are the true western desert indigenous people, as early as 10,000  b.C

The Siwan Language, traditions, rites, dress, decorations and tools are mostly alien to the other oases in the western desert

They are more mostly aligned with people from the Maghreb, the Northern coast of Africa from Tripoli to Morocco

Siwa, known to have been inhabited in Paleolithic and Neolithic times. It was called Santariya by the Arab.The Oasis of Jupiter- Amun, Marmaricus Hammon

Little is known about Siwa during the thousands of years of the ancient Egyptians Civilization. No monuments from any of the three major Egyptians period. the old, middle or new kingdoms have been found in Siwa. There are indications that, along with other oases. It was colonized by Ramses the Third. Evidence exists from the twenty-sixth dynasty(66-3-525 B.c.) to indicate that Siwa was part of the Egyptians Empire during those times

Once the Greeks established themselves in Cyrene(In Present-day- Libya), legend tells us the oracle of Amun was discovered and elevated to a place of honour among the Greeks, one by one, the Great leaders came for advising and focus, They had to endure the great hardship to reach their quest. The most important visitors of all was Alexander the great.

Alexander the great and Siwa oasis

After conquering Egypt( 331 B.c.)and Founding the city of Alexandria, Alexander like Perseus and Hercules before him, made the long and exhausting eight-days journey far into the desert to consult, the famous oracle of Amun.

The Campain of Alexander got lost, run out of the water, halfway along the desert route the guides lost their way. The Expedition was saved only  by Miraculous intervention of two hissing snakes who let the Caravan into Siwa

The Siwa depression,82 Kilometers long and  9 to 28 Kilometers wide, is the furthest Egyptian depression from the Nile valley

The Northern escarpment comprises a system of bays and outlier mountains cut by wadis and passes, The southern portion of the oasis, Including the escarpment, is inundated by dunes from the great sand sea which extend over 500 Kilometers North to the south and -60 to 80 kilometres.

1-The Fortress at Shali

Built on a hill inside a Protective wall originally breached by a single gate, the maze of mud-brick buildings that Comprises the Fortress served the people of the oasis for nearly 8 centuries. The inhabitants had to live in the narrow quarters,  sharing their animals, which were herded into the fortress each evening.

The huge chunks of salt so prevalent in Siwa oasis were used  in the constructions  of the fortress, as they helped to strengthen the wall, Rain has unfortunately proved to be more destructive to the fortress than any human invaders 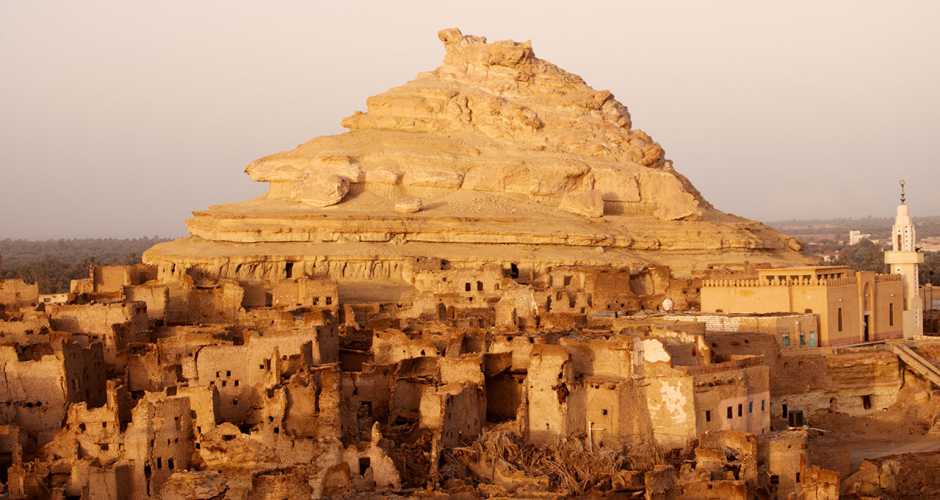 Gebel Al Dakrur, Just a few miles south of Shali, is visible from all points in the oasis and its triple peaks serve as a good landmark when travelling East or west. The view from the summit of this mountain is outstanding. Sand Cures in Siwa oasis There are three doctors at Dakrur famous of their sand cures treatment of rheumatism and arthritis.
A sand bath is taken during the hottest month of the year( July through September)Patients from as far away as Sweden and Germany make the Journey to Siwa oasis for the cures They stay at one of the Clinics at the base of the mountain, Early each morning workers dig shallow graves in the sand along the slopes to allow the sun to heat the area. At the midday when the sun is the most intense, patient lie in the hollow and covered with additional hot sand, less sand is piled in the area around the heart, here the patient is removed to a nearby tent, wrapped in hot blankets and asked to drink herbal teas and chicken soup, the treatment continues for five to seven days during which time the patient is forbidden to bathe or drink any cold 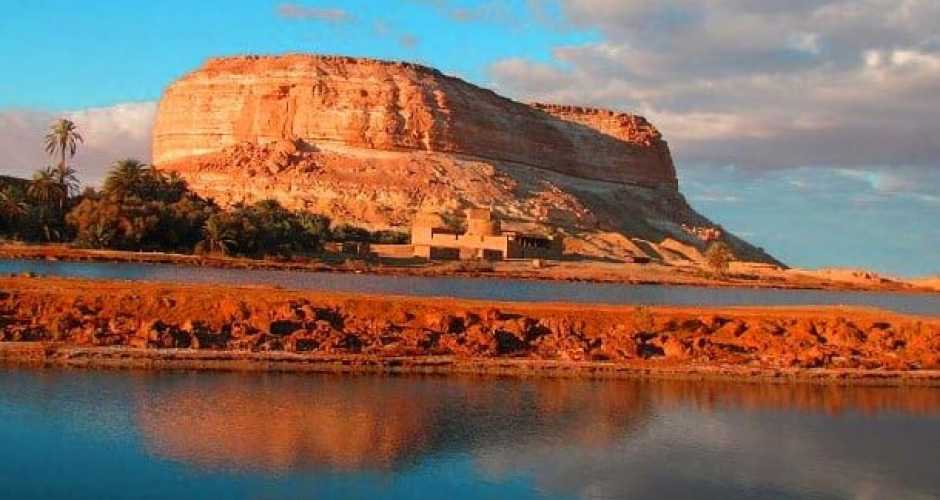 The springs of Siwa are famous throughout the western desert, The spring of the sun Or Cleopatra's bath, has been mentioned by travellers to Siwa since the days of Herodotus, legend maintains that Cleopatra swam here when she visited Siwa oasis, So, It must be assumed, did Alexander the great 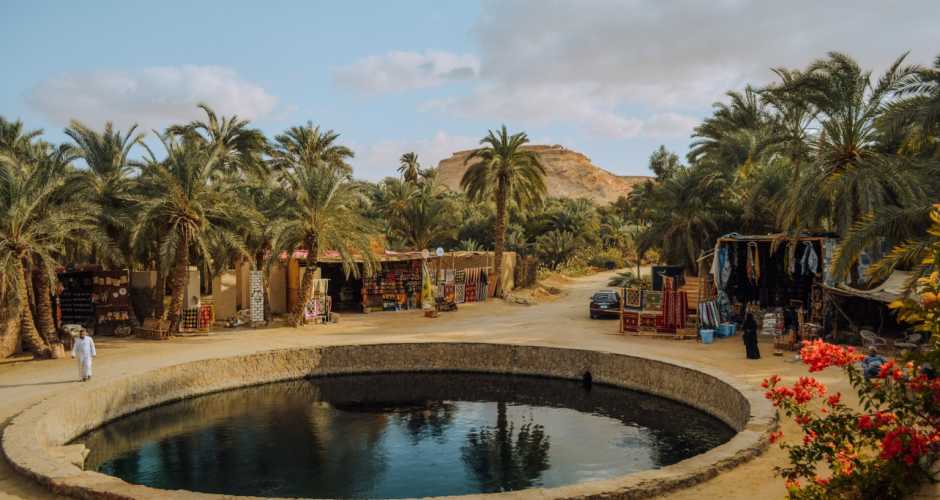 4-The temple of the Oracle

It is a spectacular temple, The temple of Amun, built during twenty-sixth Dynasty, the temple and its oracle flourished into  the Greek and Roman times
The temple was built on a top of mountains, The ruins of the temple can be reached by climbing a well-marked path up the side of the rock.
According to a legend, the temple was built in honour of ham, the son of Noah, by Danaus the Egyptian, another legend relates the foundation of the temple to the Greek god Dionysus. While lost in the western desert. Dionysus was perishing of thirst, when A ram appeared and guided him to the spring of Agroumi, In Gratitude Dionysus erected this temple.
Oracle, Manifestations of God, were highly revered in the ancient world, Able to see into the future they were consulted regularly before important decisions were
made
It is believed that Alexander the Great wished to consult the Siwan oracle to seek confirmation that he was the son of Zeus. The Greek god of gods, when he and his entourage arrived, A manifestation of the oracle was paraded through the city accompanied by eighty priests, After his visit to the oracle, whenever his image appeared  on coin, Alexander was shown with horns of the ram, the symbol of Amun, the god of gods in Egypt 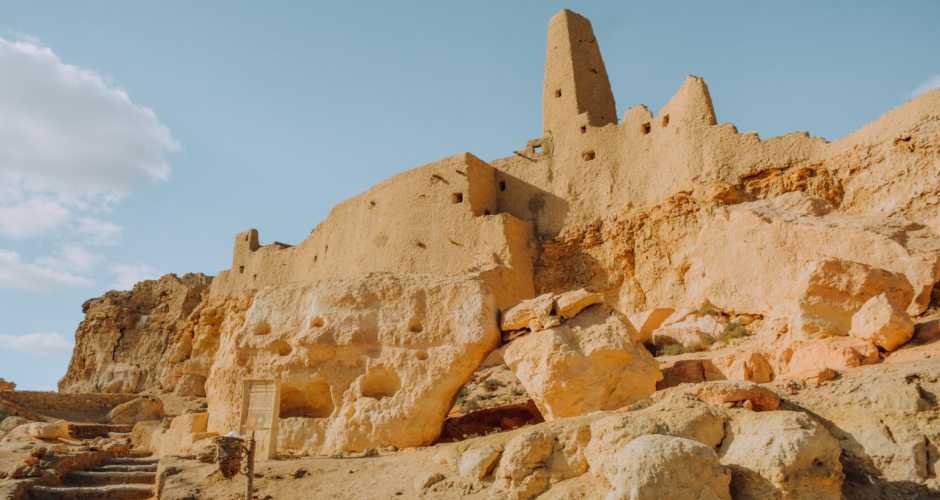 Fatnas is  Small island in Birket Siwa, you can reach it by walk or by bike, It is a wonderful place to sit and enjoy the sunset, You will get a spectacular view of the lake with Gebel Bayda and Hamra forming the backdrop to the west, A walk in the Garden show a variety of trees including Banana, dates and olive. 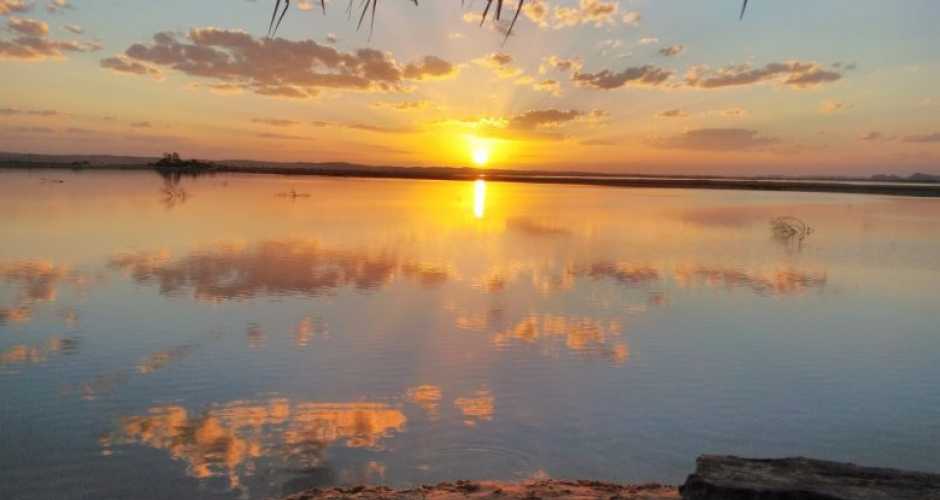 Gebel Al Mawta, Mountain of the Dead, is a conical mountain a little over a kilometre to the north of Shali. Tombs from twenty-sixth Dynasty, Ptolemaic, and the Roman periods are cut into the side of the mountain, There are four tombs worth seeing at Gebel Al – Mawta.

Tomb of Niperpathot
The tomb of Niperpathot is a large tomb and one of the oldest tombs in the oasis, Almost certainly from the Twenty-sixth Dynasty. It has a court with 3 tombs on the Mountain. Niperpathot was the Prophet of Osiris and scribe of the dive documents.

The Tomb of the Crocodile:
Excavated in 1941 and  consists of three rooms and decorations of Osiris, Hathor and Crocodile Sobek

The Tomb of Si- Amun:
Ahmed Fakhry called the tomb of Si Amun, the most beautiful in the western desert. Si Amun appears to have been a wealthy oasian, Perhaps Greek origin, but a follower to the ancient Egyptians believe, The tomb contains Image from the Egyptians pantheon, including an Exquisite painting of the goddess nut standing beside a sycamore tree. 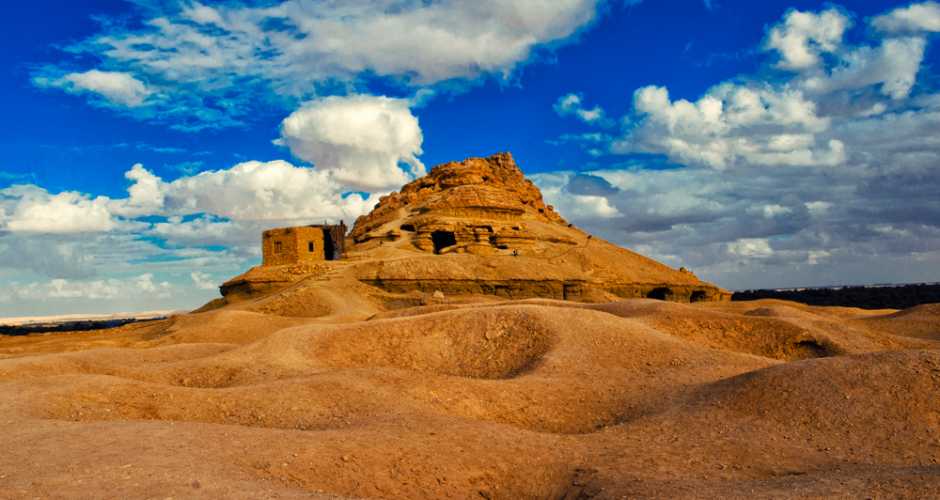 Bir Wahid, (12 km southwest of Siwa.).ot spring out at the dunes of the Great Sand Sea. Spend a night on a desert safari in a 4x4. Experience enormous rolling sand dunes. Sandboarding can be done at a small additional cost, ask before departing. Swim in the hot and cold springs in the desert - excellent, although the hot spring is filled with (possibly rusted) minerals which will leave orange stains on clothing and towels. This may or may not be due to the pipe which supplies the pool. The cold spring is in fact lake-sized with very cold and clean water. Visit the fossilized sea remains in the desert. Sleep overnight at a touristy Bedouin camp, dinner provided. More than likely, the driver will leave and return at 8:00 AM to drive back to Siwa 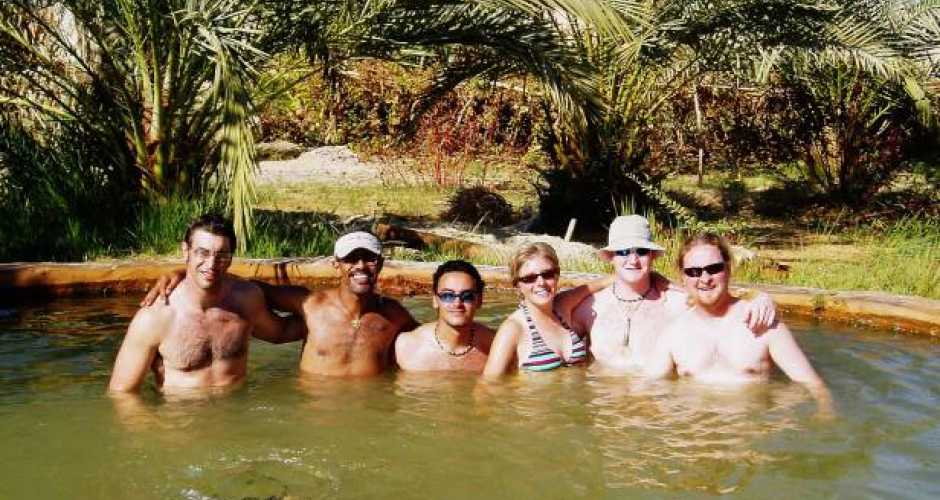 (200m further from the Temple of the Oracle). This structure is almost completely destroyed, owing to its dynamiting in 1896 by an Ottoman governor eager to acquire building material. An inscribed wall represents all that remains to be seen. Based on earlier drawings by pioneer explorers, however, scholars have deduced that the temple was erected by the pharaoh Nectanebo of the 30th Dynasty. 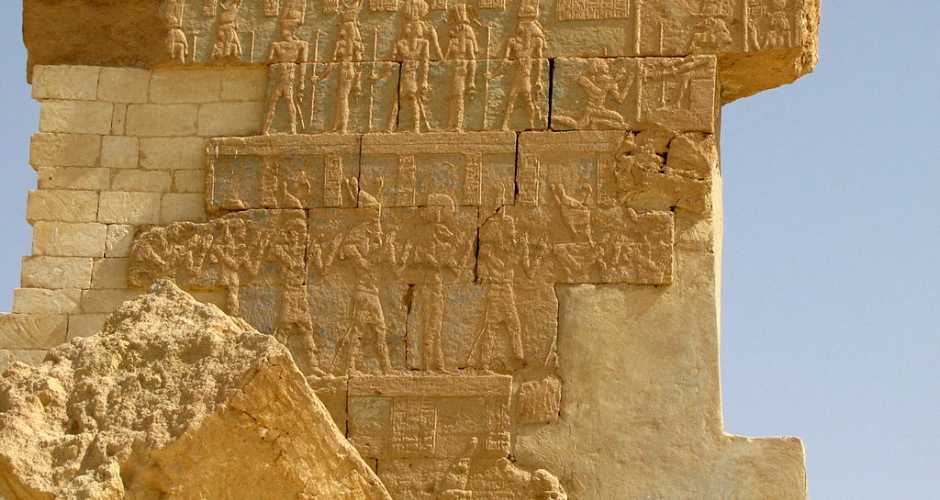 The highlights of the Siwan safari are of course off-roading in 4x4s, sand-boarding down the soft desert dunes, visiting hot springs, and enjoying the sunset while sipping on Louiza, or Siwan lemongrass tea. 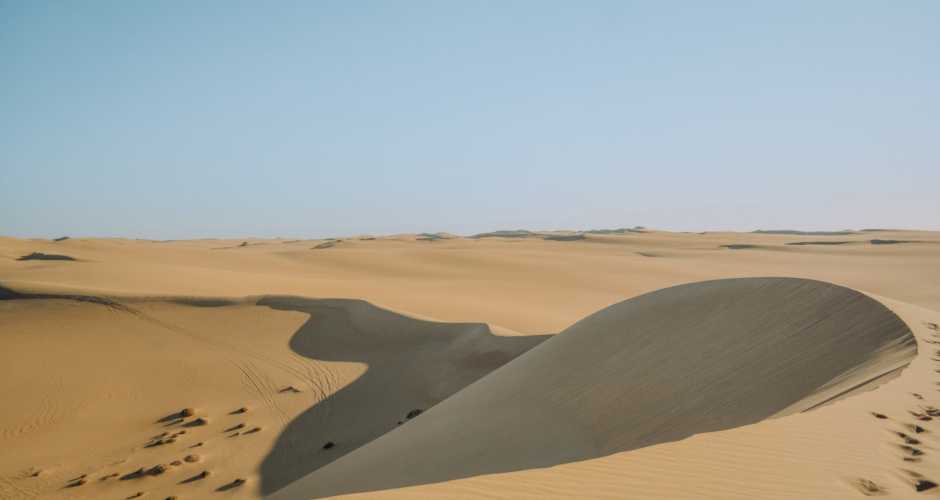 Camping in the desert

Wrap up your day at Camp Ali Khaled also known as Mountain Camp. Certainly, the most lively and famed camp in Siwa. Make sure to grab your bathing suit and a change of clothes, as this is one of the few camps that have a hot spring in the middle of the establishment. At the camp, you can take a dip in the spring, enjoy local Siwan dances, music, and a hefty dinner. 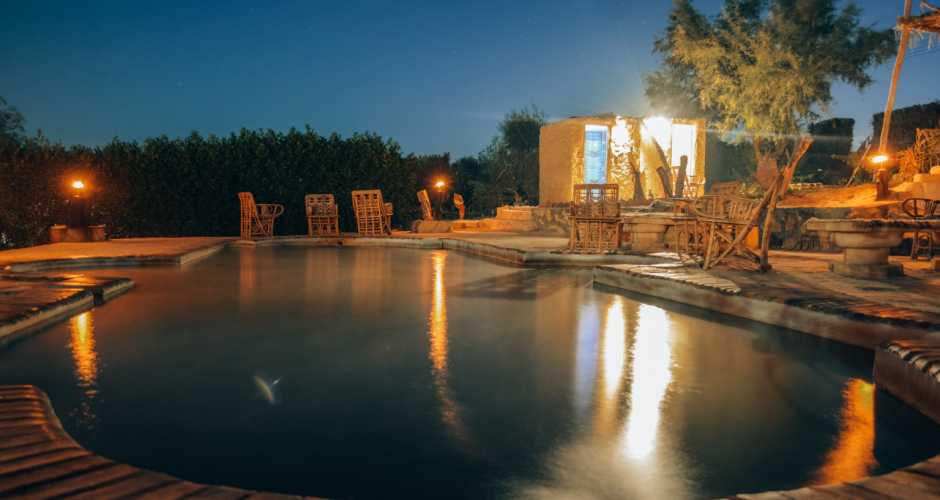 10-The salt Lakes in Siwa

I have just discovered this amazing lake on my last visit to Siwa and I need to put it as number one in Siwa attractions. The place is really cool and not easy to reach as you need to drive 15 to 20 K.M from Siwa. I see the salt lakes as unique places and does not exist in any other places in Egypt. The water takes you above, You don't need to swim. Take care when you swim and don't let the water reach your eyes. as it is really painful. Choose the crystal lake and they are many of them. But keep looking for the purest one, when you see the bottom. Take a bottle of Mineral water to shower with after swimming in the lake, The salt lakes have similar hyper-salinity properties to those of Jordan’s Dead Sea. This also means that the lakes hold great healing properties, much stronger than regular seawater. In all cases, they make for a wonderful swim!

I do recommend doing a Cleopatra bath after this visit. As you will get cleaned from the Pure underground water of Cleopatra bath 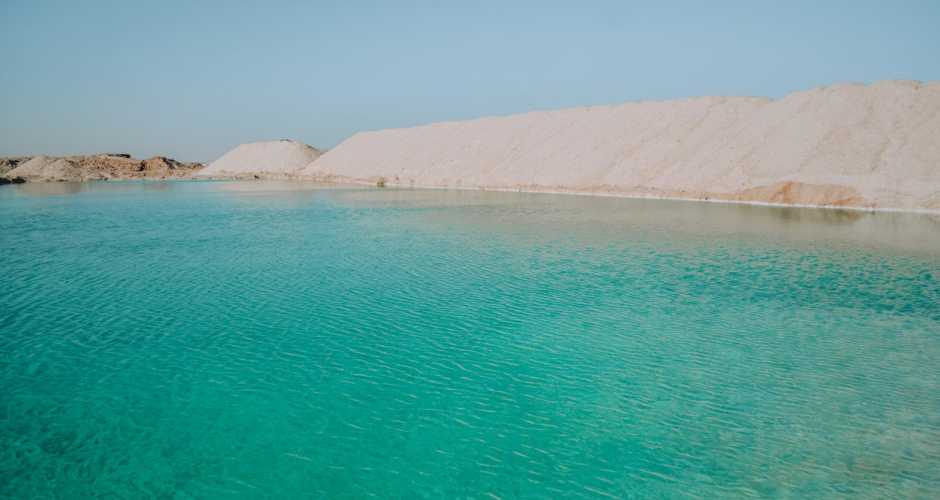 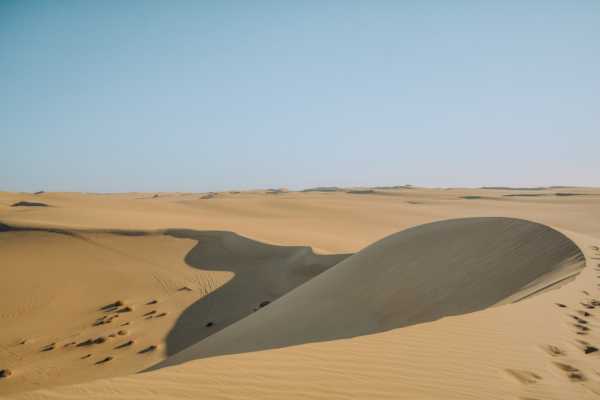 We offer 3 days tour package to Siwa oasis from Cairo, Visit El Alamein on the way to Siwa oasis lies in the western desert It is 738 km from Cairo, Duration: 8 hours, Visit the Fortress at Shali, Cleopatra`s Bath, The temple of the Oracle, Gebel, and Mawta, and the great sand sea with 4x4 and, know more about Siwa oasis with your Private tour guide . 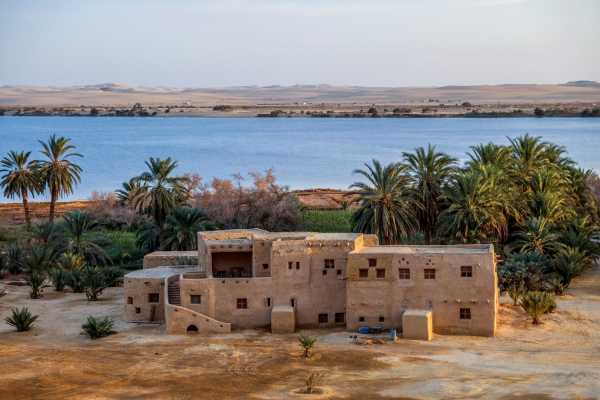 We offer a 4-day tour package to Siwa Oasis in Cairo, visit El Alamein on the way to Siwa Oasis. Siwa Oasis is located in the western desert. It is 738 km from Cairo. Duration: 8 hours. Visit the fortress of Shali, the bath of Cleopatra. , The Temple of the Oracle, Gebel and Mawta, Gebel Al Dakrur, Lake Fatnas and the big sea of sand by 4x4 and learn more about the oasis of Siwa with your private guide 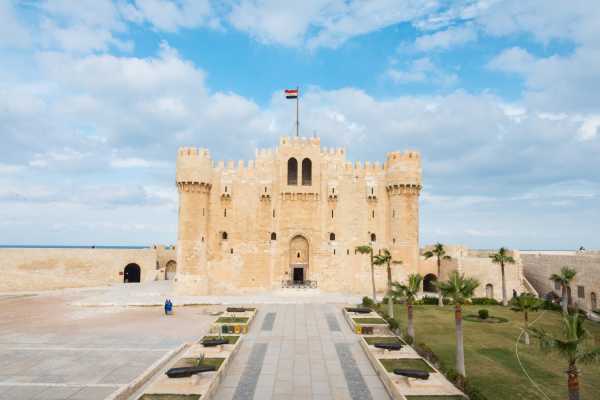