Saqqara was a Principal Necropolis of the Ancient  City Memphis, situated some 17 K.m from Giza Plateau, which was used from the 1st  Dynasty till the Christian Period. Sakkara served as the official Necropolis of Egypt`s main Capital City ( Memphis). The name of the site, Maybe derived from the God-Sokar- Or from an Arab tribe once a resident in the Area.

The earliest example of an Egyptian Pyramid, a Close look at it is Construction shows that it was originally conceived as a Mastaba building that was later developed into Step Pyramid through Several stages. The Granit burial chamber of the king is Situated underneath the Enormous Mass. it was accessible through a descending passage that could be entered from the Court at the Pyramids' Northern side. Many subterranean Galleries were discovered underneath the Steppyramids, as well as several rooms panelled with blue(Faience) Tiles, Thousands of stone vessels bearing the name of Djoser were found in these galleries 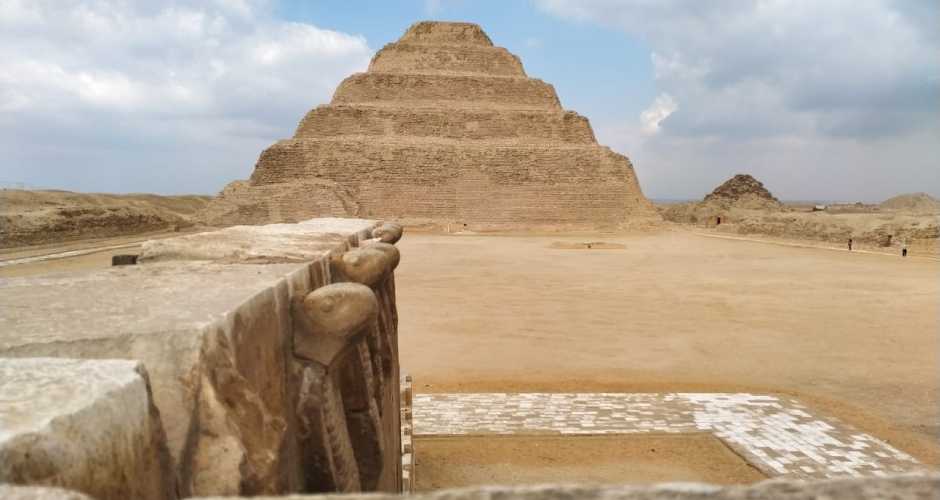 2-The Museum of Imhotep

It was with great excitement that the new Imhotep Museum was opened in April 2006 by Dr Zahi Hawass, Secretary-General of the Supreme Council of Antiquities. A modern museum, both in technology and security, this is a place not to be missed on your next visit to Saqqara. Located twenty kilometers south of the Giza Pyramids, Saqqara is the site of the Step Pyramid and the funerary complex of King Zoser (Djoser), the Pyramid of Unas, the Teti Pyramid, Old Kingdom tombs with scenes of daily life, and much more. The Step Pyramid of Zoser is Egypt's first pyramid, designed by Imhotep, for whom the museum is named. The sands of Saqqara have yielded treasures from the Archaic Period, the Old Kingdom, Middle Kingdom, New Kingdom, Late Period and Greco-Roman Period. And there is still much yet to be discovered! The excavations are continuing and each season more treasures are found. 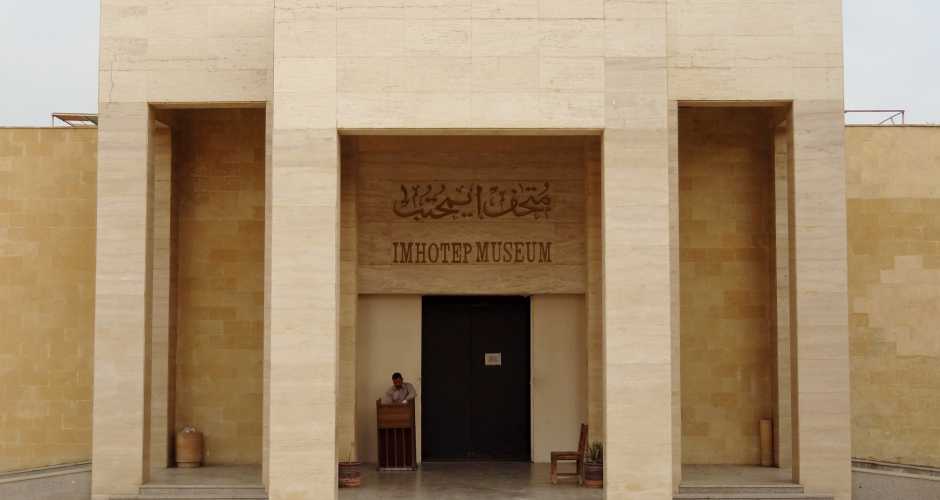 The term* Serapeum is applied to the buildings associated with the Cult of the Apis bull, The Serapeum at Sakkara was the burial-Palace of the Apis bull-Consists of a series of Catacombs to the Northwest of the Step Pyramid of Djoser from the 30th Dynasty onwards.The Serapeum was excavated in 1851 by Auguste Marriette, The Catacombs date back at the least as early as the 18th Dynasty. (1550-1295 b.c) and Continued in use until the Ptolemaic Period, They contain many massive granites Sarcophagi, weighing up to 80 tons 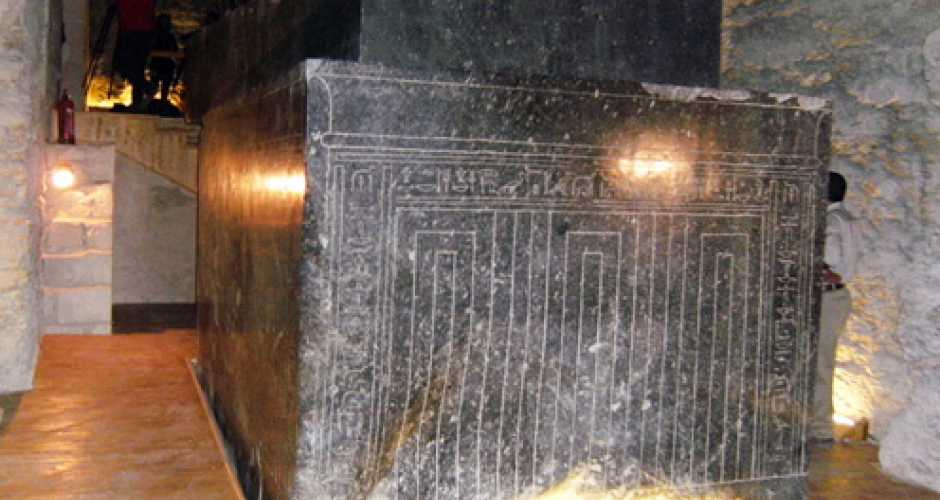 4- The Pyramid of  King Teti at Sakara

Teti was the founder of the 6th Dynasty (2345-2181 BC). His pyramid was discovered in 1853 by Mariette, but it is mostly a pile of rubble in constant danger of being covered by the sand. There is a steep pathway that leads to the funerary chamber. The chamber ceiling is decorated with stars.

He ruled Ancient Egypt from 2323 till 2291 BC. His wife, Queen Ipwet, is the daughter of King Wenis who was the last king of the 5th Dynasty. The queen was the mother of Teti's heir, King Pepi I. Historians believe that she is the one that gave him the royal power. Almost all the major court officials of King Wenis remained in power during Teti's reign. The king was murdered by his guards for mysterious reasons.

Teti granted more lands to Abydos and his name was inscribed in Hatnub. He built a pyramid in Saqqara which is called by modern Egyptians the " Prison Pyramid". Most of his reign was not documented. Egyptologists discovered a statue of him made of black and pink granite. The statue is located at the Egyptian museum. Teti's son-in-law, Mereruka, was also his vizier. The Mastaba of Mereruka is located in Saqqara.

The pyramid of Teti is surrounded by some of the most important Mastabas of Saqqara. The pyramid itself has deteriorated due to human intervention. The burial chamber still holds hieroglyphic texts, the so-called 'Pyramid Texts'. 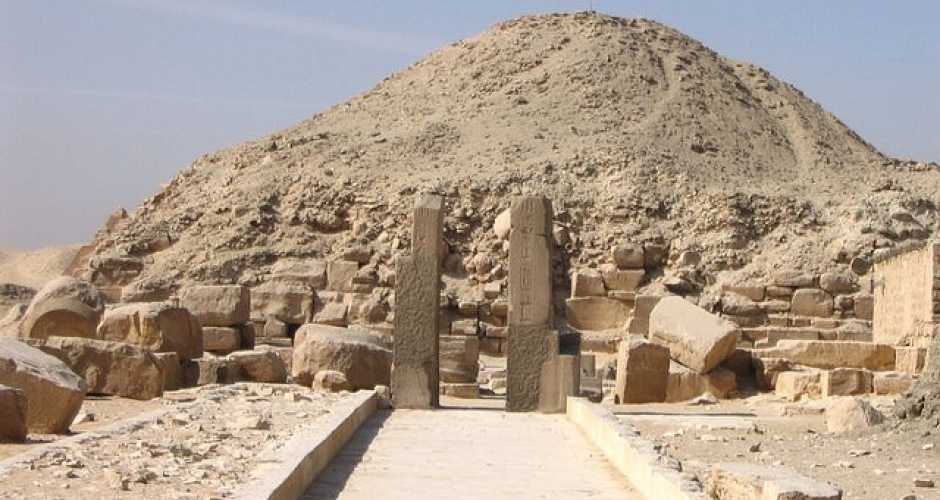 The mastaba of Mereruka is the largest and most elaborate of all the non-royal tombs in Saqqara with 33 rooms in total. Mereruka was the vizier to king Teti, who was the first pharaoh of the 6th dynasty Old Kingdom, Mereruka was married to Teti's daughter, princess Seshseshet Waatetkhethor. He was, therefore, the king's son-in-law. Princess Seshseshet Waatetkhethor is buried in Mereruka's mastaba tomb along with their son, Meriteti. The paintings on the wall in the entrance of the tomb show Mereruka painting the seasons and playing a board game. The first three chambers are decorated with scenes of furniture-making and goldsmith work. A lifelike statue of Mereruka was found intact within the principal chamber at the far end of his mastaba tomb. This chamber is approached through the mastaba tomb's false door Mereruka's mastaba tomb boasts vibrant and well-preserved tomb decorations and numerous relief scenes. His mastaba tomb remained hidden from view until it was discovered and excavated by Jacques de Morgan, of the Egyptian Antiquities Service in 1892. However, the first major publication on his tomb did not occur until over 40 years later in 1936 by Prentice Duell. Mereruka was also known by his 'beautiful' or chosen name of Meri. 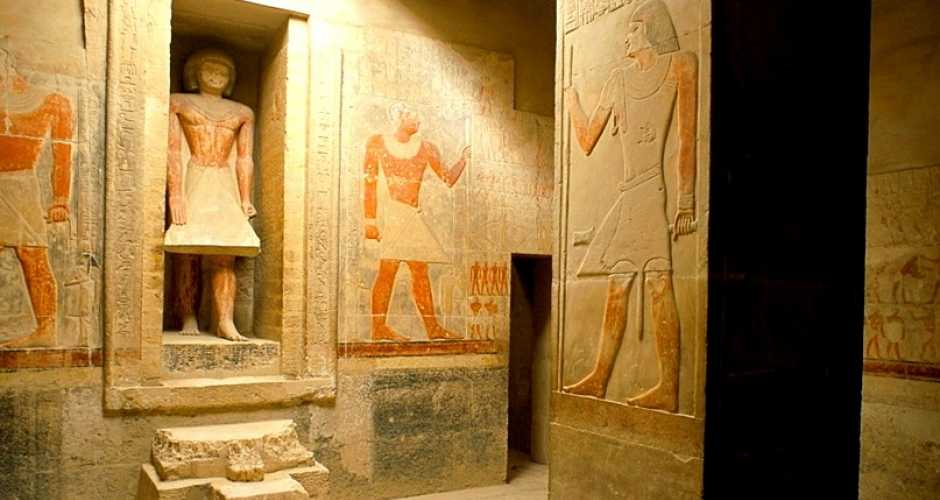 The well-preserved mastaba of Ti is located at the northern edge of the Saqqara necropolis, about 300m north of the ‘Philosopher’s Circle’. Ti held the titles of ‘Overseer of the Pyramids of Niuserre’, and ‘Overseer of the Sun-Temples of Sahure, Neferirkare and Niuserre’, making him a high-status official during Dynasty V.The tomb was discovered by Auguste Mariette in 1865 and has since been restored and reconstructed by the Egyptian Antiquities Department, to become known as probably the most beautifully decorated Old Kingdom mastaba in the whole necropolis. The tomb not only has superb reliefs, but the variety of subjects also makes it very interesting.

As with other tombs dating to this period, the entrance was via a portico on the northern side. This leads into a huge columned courtyard with twelve square pillars and has a burial shaft (uninscribed) in the centre where Ti’s empty sarcophagus was found. Unfortunately little exists today of the courtyard decoration, but on the north-east corner, there is an aperture into the first serdab (statue chamber). Reliefs remaining in the courtyard include Ti in agricultural scenes and scenes of daily life. At the south-west corner of the courtyard, there is a false door stela of his son, Demedji.

A narrow decorated corridor leads to two rooms and a false door of Ti’s wife, Neferhetpes, who was a Priestess of Neith and Hathor, can be seen on the right-hand side of the passage. Further along on the right-hand side is a long narrow chamber which is decorated with colourful reliefs of food preparation, including cooking and brewing, and pottery production, as well as scribes recording the activities. 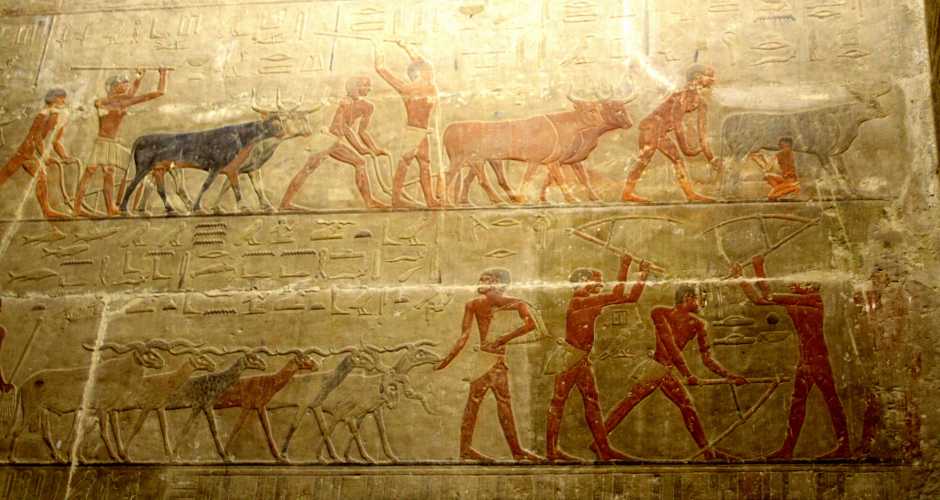 7-The Tomb of Mehu

The 4,000-year-old Tomb of Mehu belonged to a high-ranking official. Archeologists say its colorful wall decorations shed light on how Egyptians lived more than a thousand years before the pyramids were constructed. It was originally discovered back in 1940 by Egyptologist Zaki Saad but was closed to the public until the recent completion of restoration work.

The tomb is one of the most beautiful in the Saqqara necropolis, an ancient burial ground south of Cairo, says Mostafa Waziri, secretary-general of Egypt's Supreme Council of Antiquities. It's the final resting place of Mehu, an official who lived during the time of King Titi in the Sixth dynasty. The chambers also house Mery Re Ankh, Mehu's son, and his grandson Hetep Kha II.

Mehu's tomb is notable for its colorful walls, adorned with vibrant drawings and inscriptions chronicling ancient Egyptian life. The Ministry of Antiquities notes the scenes include hunting, fishing, cooking, and dancing. The tomb is one of many ancient attractions in the Saqqara burial ground. The area has numerous other tombs and small pyramids, which Egyptian authorities are continuing to open up. 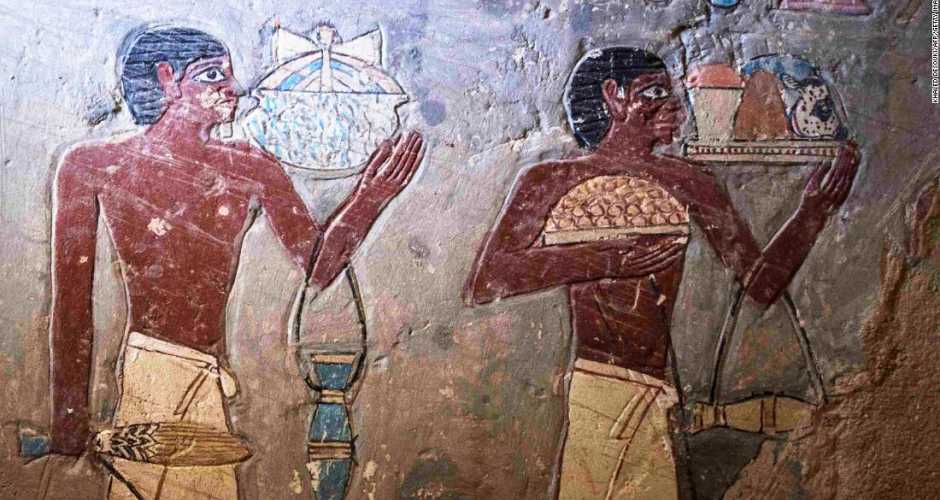 8-Tomb of Akhethotep and Ptahhotep 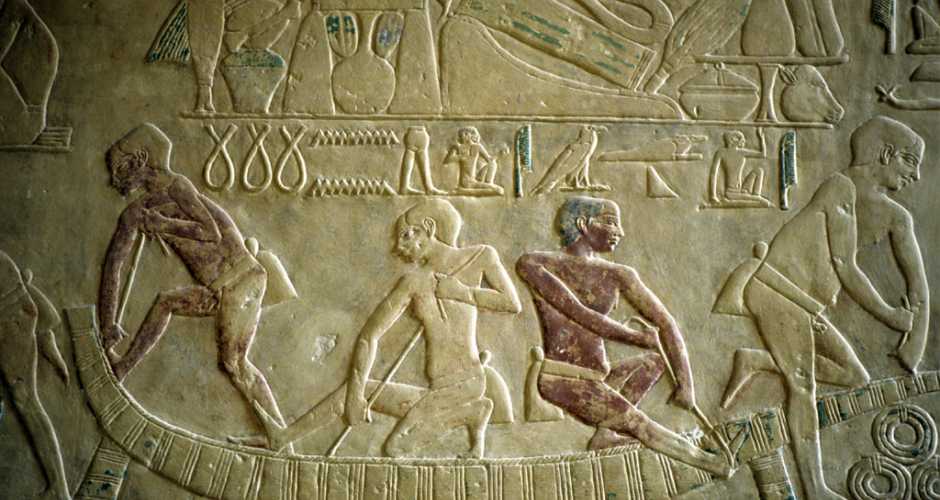 The large mastaba of Kagemni is situated on the northern side of Teti’s pyramid at Saqqara in the block of tombs belonging to the officials of the king’s Dynasty VI reign. Kagemni (also called Memi) is named as ‘Chief Justice and Vizier, Overseer of the Pyramid town of Teti, Overseer of the Priests of Teti’ and was married to a daughter of King Teti, Nebti-nubkhet. This princess, like the wife of Mereruka, was also known as Sesheshet. Although the tomb was first discovered by Karl Lepsius in 1843, it was first excavated by Jacque de Morgan in 1893, then later by Victor Loret between 1897 and 1899 and by Cecil Firth in the 1920s. In the final years of the 20th century, Dr Yvonne Harpur and her team have been recording the reliefs in Kagemni’s tomb, pioneering their own methods of using photographic and epigraphic techniques to document the tomb-chapel. The tomb is renowned for its beautiful depictions of birds and animals.

Kagemni’s tomb is entered from the east and has a façade similar in appearance to that of Mereruka, with a double representation of the deceased on the entrance jambs, giving his names and titles. Inside the doorway, Kagemni is portrayed as being rather fat! There are eight decorated chambers containing very fine reliefs as well as five store-rooms, but unfortunately, the colors of the decorated walls are not as well preserved as those of Mereruka. The first chamber contains remains of the lower part of a standard scene depicting fishing and fowling in the marshes, with the deceased standing in a papyrus boat. 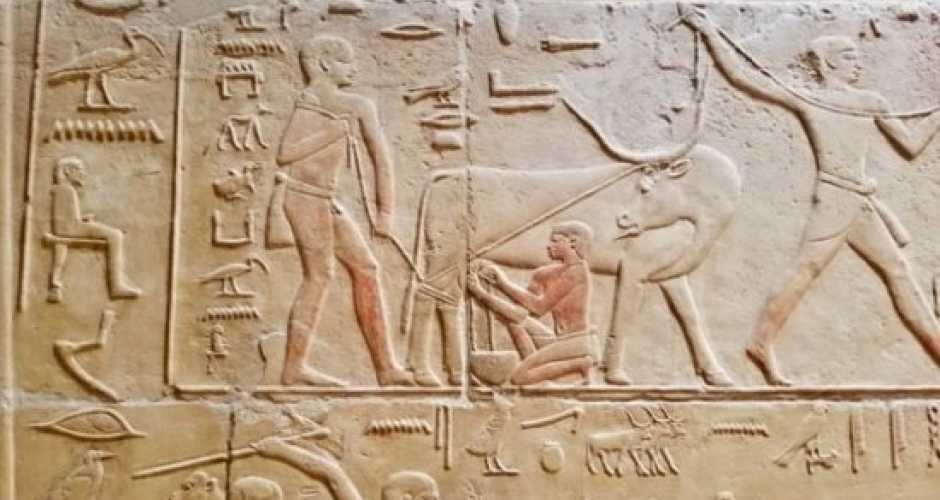 10-The Pyramid of Unas

The king's pyramid measured 57.75m to aside. With a slope of 56°, it originally rose to a height of 43m. It was thus considerably smaller than Netjerikhet's pyramid and even slightly smaller than Userkaf's. The pyramid appears to have been built in a manner similar to Djedkare's: the core masonry consisted of accreted blocks, encased in a fine limestone casing.By the New Kingdom, the pyramid had already fallen into decay. This is shown by a massive inscription left by Khaemwaset, the famous son of Ramesses II and High-priest of Memphis, referring to his restoration of the monument.

The ceiling of the burial chamber was painted with golden stars in a dark blue sky. Unas was thus buried in a black basalt sarcophagus, representing the (fertile) earth, in an area closely resembling his living quarters, underneath the dark nightly sky.

Even more important, however, is the decoration of the remainder of the burial chamber, the antechamber and part of the horizontal passage, which consists of vertical columns of meticulously carved hieroglyphs painted in blue. These columns contain the earliest known example of the so-called Pyramid Texts, and even more the oldest collection of religious texts known to mankind! They are a collection of spells and formulae meant to protect the deceased in the afterlife. The pyramid of Unas contains only 283 of the more than 700 known spells of the Pyramid Texts. 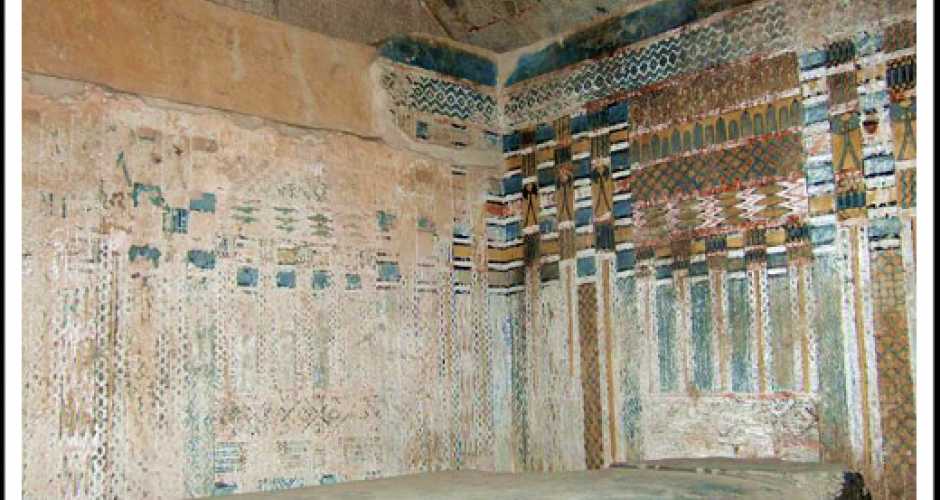 Day Tour to Giza Pyramids and Saqqara from Cairo 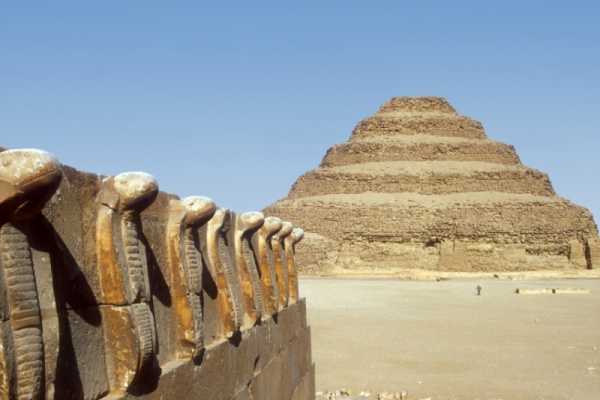 We offer Private day trip to Sakkara attractions from Cairo, Visit the Step Pyramids of King Djoser, The Pyramid of King Teti, The Mastaba of Meriruka, Kagmeni, Ptah Hotep, The beautiful tomb of Mehu,The famous catacombs of Serappeum, The tomb of Ti