Most visitors to Farafra Oasis go there to see the White Desert, el-Sahara el-Beida, the area to the north-east of Qasr el-Farafra which is renowned for its spectacular scenery. The chalk-white landscape is strewn with alien shapes, boulders of brilliant white which thrust up from the surface of the desert, intensified by the clear light of noon, shimmering gold at sunset or blackened and shrunken in a cloud-filled sky.

Many of the formations are given descriptive names – sculpted by the harsh desert winds into weird shapes which constantly change over time. There are ‘monoliths’ and ‘mushrooms’, ‘ice cream cones’, ‘tents’ and ‘crickets’, as well as the majestic conical flat-topped ‘inselbergs’, to name but a few of the formations.

In the remote past, the White Desert was a sea-bed, the sedimentary layers of rock formed by marine fauna when the ocean dried up. Later a habitat for many roaming herds of elephant, giraffe, gazelle and other animals, the desert would have been a savannah with lush green areas and lakes full of fish, an ideal hunting ground for pre-historic man. The landscape we see today was formed by the plateau breaking down, leaving harder rock shapes standing while the softer parts are eroded away by wind and sand. In some parts, the chalk surface still has the appearance of delicate wind-ruffled waves on water

Many visitors choose an overnight camping safari to witness the drama of both sunset and dawn. The new tracks are laid out to guide vehicles past the most famous desert landmarks, first a field of giant ‘mushrooms’, followed by an ancient lone Acacia tree.

Another area is known as ‘The White House’, an enclosure of rocks surrounded by gleaming white chalk fields and nearby, a narrow entrance to a deep cave penetrates the rock.

You roll out a sleeping bag on the soft sand and crawl inside and lie side by side with your companions like a row of mummies gazing at the brilliant stars tracking their path across the skies. A desert fox may drop by to clear up scraps of food, and just as quickly vanish again into the darkness, leaving only paw prints as evidence, along with bird tracks in the sand.

Beyond this in the ‘New Desert’ which is only accessible by 4WD or camel, the landscape becomes even whiter. The boulders crowd together, are higher and larger and everywhere weird shapes appear that might remind you of a chicken or a hawk, a troupe of dancers or old men wearing a hat. The shapes change constantly as the light changes and you move around them and as the sun begins to set they turn a softly glowing pink

A night under the stars in the White Desert is an experience never forgotten. As the sky turns pink then deepest fiery orange, the rock-shapes fade, and silence are all around. Sitting around a small fire and enjoying the simplest meal of chicken, rice, and vegetables, you will feel like nothing has ever tasted so good.

If the moon is near full, the white chalk rock shapes glow eerily, like ghosts in the darkness under a sky still filled with bright stars and there is no need for artificial lights. The silence is immense and there is a feeling of unreality as though walking on the surface of Mars.

The White Desert is a place that is very hard to leave. It is a truly magical experience. 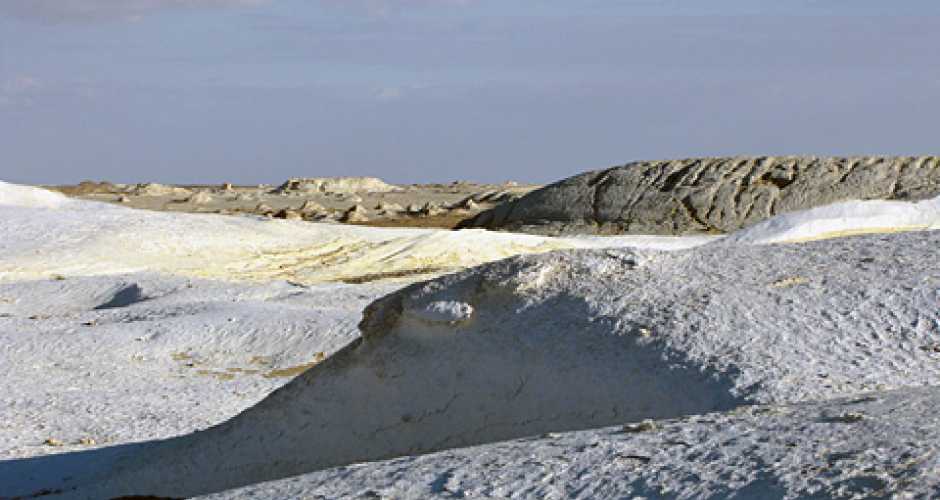