The tombs at Qasr Selim (26th Dynasty) In 1938 the Egyptian archaeologist Ahmed Fakhry (1905-1973) discovered four tombs at the ridge of Qarat Qasr Selim. Two of the tombs are richly decorated and open to the public. The two tombs belong to Zed-Amun-ef-ankh and his son Bannentiu, members of a rich family of merchants. They lived during Ahmose II's (570 - 526 BC) reign. The entrance of the hypostyle burial chamber of Zed-Amun-ef-ankh lies at the bottom of a pit five meters deep. It contains scenes of the funeral procession and the Four Sons of Horus.
According to the ancient inscriptions Bannentiu had served as both a priest and prophet. The burial chambers of this tomb can be reached through a shaft about 6 meters deep. The scenes in the inner burial chamber contain a well-preserved representation of the Judgement Hall of Osiris and the weighing of the heart of the deceased.
Regrettably, both tombs were reused as burial places during Roman times and robbed in recent times, when some mummies, beads, and amulets were taken. Luckily, both tombs still portray some grand decorations and are useful to our understanding of early life in this Oasis. 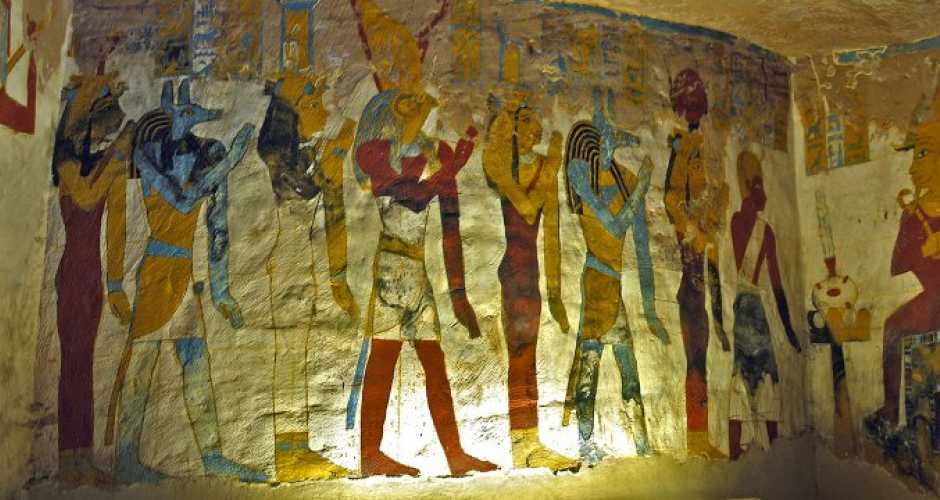